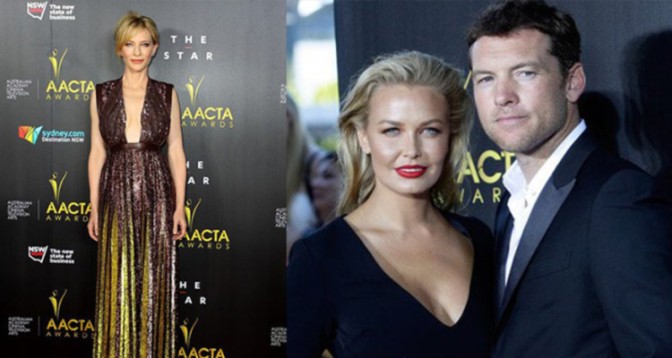 It was Australia’s night of nights as actors, directors, models, singers and A-list celebrities hit the red carpet for the Australian Academy of Cinema and Television Awards (AACTAs). The night, held at The Star Event Centre in Sydney, was the biggest award ceremony this year and attended by 4000 patrons on Thursday.

Kicking off with the red carpet, Lara Bingle and Sam Worthington made their first official appearance as a couple at the event and snuggled for the cameras despite rejecting interviews. New parents Rove McManus and Tasma Walton also attended, with Walton nominated for Best Actress for Mystery Road. The Bachelor’s Tim Robards and Anna Heinrich also made their way down the press line (and had some sneaky ice cream at the exclusive after party!)

In the award ceremony Australian blockbuster The Great Gatsby won 13 categories including Best Film. Based on the novel by American writer F. Scott Fitzgerald, Baz Lurhmann’s Gatsby became the highest grossing Australian film of all time last year despite negative critical reception. Luhrmann was named Best Director and it’s star Leonardo DiCaprio won Best Actor. It was a landslide win for the film, which won 13 of its 14 nominations, including a special award for Visual Effects.

The Turning’s Rose Byrne won her second AACTA for Best Actress while the second most nominated film, The Rocket, set in Laos, won Original Screenplay for writer-director Kim Morduant, a category Gatsby wasn’t nominated for. The award sweep equaled that of Cate Shortland’s 2004 film Somersault where it won all the awards it was nominated for.

Minus the two and a half hour awards, the after party is where the stars all mingled with trophies in hand. Sponsored by Moet & Chandon, the free champagne flowed as industry professionals and stars conversed on The Star’s Sky Terrace, overlooking the skyline of Sydney’s CBD.