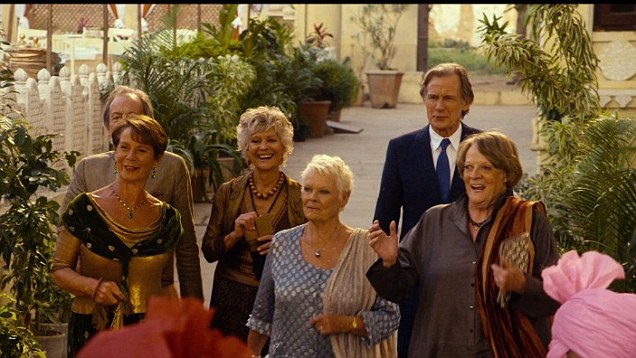 When the first Best Exotic Marigold Hotel opened back in 2012, it was memorable for so many reasons. It’s black comedy, cultural influences and originality of sending seven British pensioners to the heart of India proved to be a successful mix, grossing a surprising $135 million worldwide and won the hearts of those all around the world – this reviewer included. But when a sequel was announced, not all of us were convinced, and rightfully so. It’s a common fact that sequels are hit and miss. With films that have such a successful formula, it’s difficult to not want to repeat the same old recipe with a few new ingredients, as it is taking a chance to make the a sequel a completely different affair (see: The Hangover Part III). Unfortunately the added ingredients of The Second Best Exotic Marigold Hotel are gross sentimentality and overstuffed charm, turning this sequel into a mixed bag of fun and cliché.

Sonny (Dev Patel), owner and manager of the Best Exotic Marigold Hotel, with help from Muriel Donnelly (Maggie Smith), transforms the run down hotel loved by English retirees and strive to expand the hotel to a new property not too far away. But before they can become the best hotel franchise in India, they have to impress a surprise hotel inspector, who Sonny believes is new American guest Guy Chambers (Richard Gere). Meanwhile Evelyn (Judi Dench) and Douglas (Bill Nighy) are still unsure about their relationship as Sonny’s wedding day comes closer and closer. There’s also an absolutely horific subplot involving Norman (Ronald Pickup), Carol (Diana Hardcastle) and a hit man, which if forgotten, makes the experience more memorable.

The return of England’s favourite retirees is bittersweet in this sequel which doesn’t quite live up to the beauty of the original. Providing a gap in time between the events of the first movie and this one is a good step in the right direction, however, considering the film is released two years later and the cast have obviously aged, there’s no reason why the time gap could have been bigger. Nonetheless, bringing the whole cast together again sparks a similar flame found in the first film and sets up the film for marginal success. Endeavouring further into Indian culture so it doesn’t feel like a situation of “elderly White people in an, oh so, foreign and exotic land” is a big plus and it’s refreshing to walk away from a comedy with some extra knowledge and understanding of an under represented culture in Hollywood films.

The main problem with this sequel is its ever-changing plot and lack of focus. Though the cast create a fun atmosphere and the chemistry is excellent, the storyline is uninspired and weakens the entire experience. Sonny’s wedding is more of an instigator for actions and drama than a satisfying plot point. The side “love story” between Chambers and Sonny’s mother is unrealistic and there is very little chemistry between the two that you have to ask if this character development was even necessary. It’s confuzzling what happened director John Madden and writer Ol Parker, who were both involved in making the first film, but it’s safe to say they have lost their touch.

The original Best Exotic Marigold Hotel wasn’t a masterpiece but it was definitely a fun time that was equal in it’s emotional strength. Sadly this one has little emotional punch and tries too hard to switch between the various story lines without being meaningful. The ending is intended to be uplifting by addition of a Bollywood dance sequence, but goes too long and feels ingenuine – echoing the rest of the film. I truly wish that the film resonated with me more and that the script, direction and story were better, because there’s nothing worse than a fake and forced inauthentic film. It’s easier to forget it never happened.

Watch the trailer for The Second Best Exotic Marigold Hotel below: