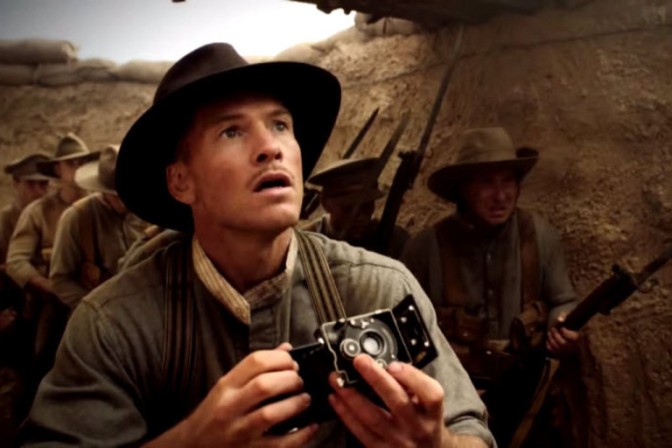 Australia loves Anzac Day. For years now citizens/fanatics have been waking up at unholy times for Martin Place’s famous dawn service, and while an attitude study from the Department of Veterans’ Affairs in 2012 determined the holiday is considered “a bogan day of work-free drinking” by many, there’s no denying Australia has a bit of an unhealthy obsession with the romanticised Anzac myth and the events of Gallipoli.

Unsurprisingly, Australian films and television have gone above and beyond this year to celebrate the centenary of the Anzacs. Between Channel Nine’s underwhelming and poorly-rated Gallipoli miniseries, the commendable Anzac Girls on ABC and Russell Crowe’s award-winning film The Water Diviner, it’s perfectly normal if you’re experiencing severe Anzac fatigue. Happily, Foxtel’s new two-part miniseries Deadline Gallipoli is a breath of fresh air in a stale genre, establishing itself as a genuinely original war narrative well worth your attention.

The series revolves around four war correspondents that accompany the Australian army off the coast of Turkey – English writer Ellis Ashmead-Bartlett (Hugh Dancy), official Australian war correspondent Charles Bean (Joel Jackson), journalist Keith Murdoch – yes, related to that Murdoch – (Ewen Leslie), and photo-journalist Phillip Schuler (Sam Worthington). Initially, the four innocently report on the facts of the Gallipoli campaign, but they soon find themselves in a war of their own; Commander Sir Ian Hamilton (Charles Dance) slips effortlessly into the role of series antagonist, whose propaganda campaign silences the harsh truths of war the journalists are fighting to report.

The series opens on a mandatory shot of rowboats hitting the shores of Gallipoli, before tracing back to a Cairo brothel to which drunken Anzacs had set fire weeks earlier. Many of the series’ initial scenes waver between following and subverting well-established archetypes of the Anzac myth; incompetent and war-happy, the naïve Australian soldiers fill their spare time in Cairo with mischief. The series is quickly saved from becoming banal, however, as the strong journalistic voices of its four protagonists begin to shape a relatively unexplored perspective of the Anzac narrative. The soldiers’ shenanigans are revealed to be underpinned by overwhelming boredom, ignorance and rejection of leadership. In one scene, Bean shames the misbehaving soldiers in his article, implying that wannabe Anzacs shouldn’t enlist in order to save face for all of Australia, much to the anger of the soldiers who see themselves as honourable heroes and defenders of the country.

As the Anzacs, generals and correspondents are transported to Gallipoli Cove, they are awakened to the unexpected horrors of war. For the soldiers, the reality of death becomes apparent when a body washes onto the beach where they are having fun. For the protagonists, a more sinister sense of impending doom is realised as they navigate the shady systems beneath the official story. In friendly competition, the ambitious reporters steal information and pry into confidential arrangements to be the first to break news, but in their innocent investigations, they quickly realise the fateful negligence of their generals and strategists.

The Fight For Information

In the years following cases like Julian Assange, Edward Snowden and Chelsea Manning, the fight for transparency, uncompromised truth and freedom of the press has never been more relevant, and therein lies Deadline Gallipoli’s intrigue. The journalists’ battles against propaganda and censorship to accurately report the events of Gallipoli become the focus of the series, particularly in its second half as they fight the military’s efforts to suppress the devastating details of the failed mission.

The apt tagline of the series reads “The first casualty of war is the truth” — an ever-relevant reference to the prospect of propaganda and censorship faced by the media in wartime. The need to toe the army line is something that has dogged the reporting of most modern wars, and echoes many journalists around the world today who are fighting for the right of information or serving time for reporting harsh truths that governments may not like.

Like contemporary journalists who observe conflicts, human rights violations and tragedy around the world, the journalists in Deadline Gallipoli cannot be silent witnesses to the senseless deaths of 8,000 young Australians. The correspondents reject the misinformation they are pressured to spread and become united in their bid to report on the war the way it is, risking their livelihoods and citizenship.

The Power of the Media

While the Anzac troops remain at the heart of the miniseries, Deadline Gallipoli is a powerful ode to the importance of free media; the Anzac myth is told through the four messengers who remain committed to telling the truth of events and whose writings account for thousands of lives lost. Over time these articles, photos and writings have made Gallipoli a moment in history for Australia to remember and remind us that their deaths were the result of sheer negligence and misinformation.

Ironically, through this ordeal one of the correspondents, Sir Keith Arthur Murdoch, eventually grew his own media empire and became the father of our favourite rotten media mogul Rupert. Keith Murdoch fought against the censorship being used to suppress criticism of the campaign, and ultimately wrote a letter to Australian Prime Minister Andrew Fisher explaining the full events. The information in that letter was soon picked up by The Times’ and The Daily Mirror’s proprietor Lord Northcliffe, who eventually became Murdoch’s friend and assisted in developing Murdoch’s own media business. The resulting publicity from the letter saw Sir Ian Hamilton relieved of command and the Anzac troops evacuated from Gallipoli effectively. Unfortunately the same praises don’t apply to old mate Rupert, whose “fight for information” has involved phone hacking and continuous efforts to avoid paying taxes. Plus the Islamophobia thing. R.I.P. Keith.

By not overdoing or reprising the same stories we were subjected to in high school, Deadline Gallipoli succeeds because of its unique angle and the strength of its cast. Joel Jackson is outstanding in his television debut as Charles Bean, the legendary journalist who wrote extensively on the events afterward. Sam Worthington and Hugh Dancy are also excellent in their respective roles as Phillip Schuler and Ellis Ashmead-Bartlett, while Ewen Leslie is remarkable as Keith Murdoch. The compelling script and direction of the miniseries ultimately makes Deadline Gallipoli an unforgettable showcase of Aussie talent and takes the lead for the number one must-see Anzac story this year.