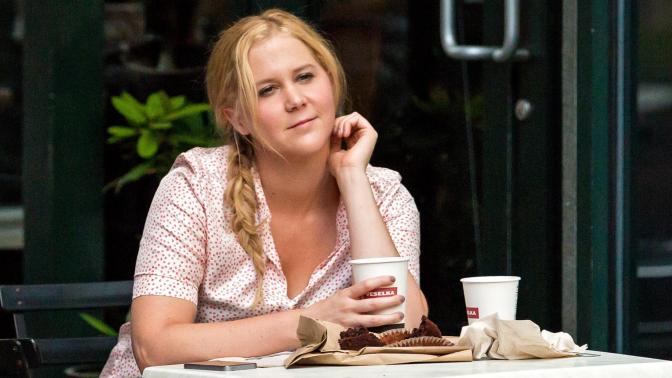 In recent years Melissa McCarthy has brought to our screens a different kind of funny woman: rowdy, sex-positive, dirty-talking, and unconventional in every sense of the word. But comedienne Amy Schumer’s debut film Trainwreck embodies many of these aspects and more as she continues to drive a provocative humour that pushes many boundaries, making the film one of the funniest and more original ones this year.

Having made a name for herself as a supremely funny stand up comedian and through her refreshingly innovative and brilliant television series Inside Amy Schumer, she takes a step further in this film, adding a significant amount of autobiographical characteristics from her own life into the script. Spearheaded by director Judd Apatow who has often put his own comedic stamp on past successes, one could not think of a better vehicle for Schumer’s entry to the film world.

The story centers on ‘Amy’, a New York City sexually liberated party girl who speaks her mind and whose ways perfectly place her at a job at a lad’s mag. Within the first fifteen minutes, we are privy to Amy’s love life, mimicking the way other depicted womanizers treat their lovers, meanwhile the men are depicted as longing for commitment and keen to spend time with Amy. It’s a fun way to set up the film and the reversed gender roles that continue.

Having been a child of divorce whose father made her repeat that “monogamy isn’t realistic” at a young age, Amy’s father (Colin Quinn) is now alone and slowly suffering from multiple sclerosis in an assisted care facility. Meanwhile her sister Kim (Brie Larson) is engaged to a man with a child from a previous relationship, living the life opposite to Amy. Between dates and walk of shames, Amy is assigned to do a feature on Aaron (Bill Hader), a surgeon for the New York Knicks. Amy quickly gets him into bed, believing it to be nothing more than another night with another guy, but alas, this time isn’t as easy as the others.

The best thing about Trainwreck is that its narrative isn’t uncomplicated. It isn’t a film solely about one woman falling in love despite being in complete denial. It isn’t a domestic drama about two sisters and their incapacitated father. The film is many things at once and the realism and humanity of it all renders it a unique comedy – something that will resonate well with audiences.

Schumer gives herself a great role here, allowing her to showcase her dramatic chops as well as the comedy that has made her an internet sensation. She is quick with wit and no part of the film feels unreal or unlike her distinctive voice. Hader is also a fantastic leading man and plays the likeable thirty-something without feeling fake or like his purpose is to teach Amy a lesson about love and monogamy. The inclusion of LeBron James is one neither Schumer nor Apatow will regret, as he gets some of the best lines and gives some magic to the whole experience. Tilda Swinton is unrecognizable but brilliant in her supporting role (which must be kept a surprise) and wrestling icon John Cena is hilarious as the bizarre hookup

Unfortunately the film loses momentum towards the end and begins to push a conservative agenda that doesn’t feel genuinely Schumer. Thankfully Trainwreck comes back last minute with a truly hilarious dance routine that will go down in history. Some viewers may be confused with the genre, unsure if it fits as a romance, comedy or drama. Nevertheless, the film accomplishes what it’s meant to do – give Schumer an opportunity to show off her acting chops and to please the audience. It’s not a perfect film, but it’s pretty damn close.

Watch the trailer for Trainwreck below: